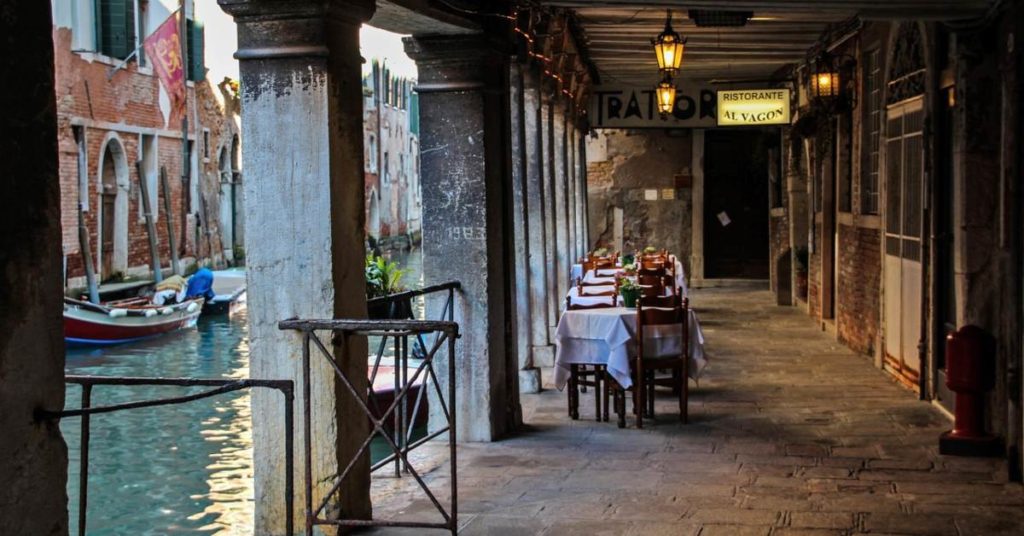 Let’s be honest, food in Venice has gotten a bad rap. Tasteless, odd, and overpriced. And to be fair, once upon a time, there may have been a whiff of truth to that sentiment. That’s because so many restaurants in Venice were skewered to attract only tourists.

But all that has changed in recent years. Actually, more like recent decades, according to Monica Cesarato, a high-profile cook, food tour leader, writer, and all-around expert on the best Venetian cuisine.

Like any city/region in Italy, the food traditions in Venice are a big part of the local culture. And Monica knows the perfect way to get acquainted with “La serenissima,” which is by strolling through the calli and campi to discover the “little bites,” or cicchetti, as they’re called in Venetian dialect.

Broadly, you might compare this type of movable feast to the tapas bars of Spain. I suppose that there are some similarities. Or call it Venice street food… and most Venice specialties are found in these types of places. They are inviting, cozy, and offer a wide variety of delicious bites. In fact, you may not even make it to the ristorante for dinner later. (Pro tip: Venice “shuts down” much earlier than cities in the middle and south of Italy, so plan accordingly.)

Well, if you want to know where the locals eat in Venice on a regular basis, it’s exactly these places, called barcari. The best food in Venice is often “hidden” inside these little gems. But you’ll need a bit of local knowledge to find the best of the best, and that’s where Monica steps in. Here’s our conversation:

To accompany your little bites, you might want a little glass of wine, an “ombra,” which literally translates as a “shadow.” During our chat, I was guilty of perpetuating the incorrect backstory. I had always heard that it was because there were wine carts serving small glasses of the local vino under the long ombra (shadow) of the campanile in St. Mark’s Square. The carts would move accordingly with the shifting angle of the sun. But apparently that’s not quite right. (I’m a person who never lets the truth get in the way of a good story. Monica set me straight.)

Is the Food in Venice Good?

Not only is it good, it can be really great. But yes, to experience this you MUST avoid the tourist traps. This might sound simple enough, but it is no easy task. I mean, who wouldn’t want to dine with a romantic view of the Rialto Bridge arching over the Grand Canal at sunset? However, it’s exactly this type of kitsch that will hit you right in the wallet. And the food will be mediocre, at best.

That said, eating well in Venice is not going to be cheap by Italian standards. In Sicily or Puglia, you might have a wonderful three course meal with wine for 20 Euro. But in Venice, you’ll definitely pay more.

But again, if you’re going to pay more, it’s best to know where your Euros will be worth the investment. Listen to the podcast to get some great advice, and then wait for Monica’s book to be published in English (in May 2022) if you want the full story. In the meantime, here’s an excerpt from Monica’s blog:

Come to Venice and experience the city like a local: go on a Traditional Bacaro tour, a culinary tasting of the best inns in Venice called Osterie or Bacari. Stand up at the counter or comfortably sit down at the wooden tables and immerse yourself in this culinary marathon, sampling some of the most popular traditional Venetian dishes on offer such as baccalà mantecato (creamy salt cod), sarde in saor (sweet and sour sardines), folpetti (boiled octopus), sun-dried tomatoes, olives, cuttlefish, polpette (meatballs), uova ripiene (deviled eggs), beans and prawns, pesce fritto (fried fish) and much more.

But what does cicchetti mean? From the Latin “ciccus,” it means small amount. Venetians eat ciccheti before lunch or dinner as an aperitif and many times they use it as an excuse to get drunk: you start with an inviting devil’s egg and a glass of white wine, then you take a small anchovy and another glass and so on. The right time to try cicchetti is just before noon and in the evenings between 6pm and 8pm when everything comes out of the kitchen nice and fresh, in a continuous stream.

History of Food in Venice

“Tell me what you eat and I’ll tell you who you are and where you’re from.”

All over Italy, the history of a city passes through its cuisine and its gastronomic traditions. Other cultures that passed through over centuries often left their own contributions.

The exchange with distant peoples have marked Venice’s history, including its culinary traditions. This helps us to understand why certain foods, some apparently culturally distant dishes, were subsequently so strongly rooted in the Venetian Lagoon.

The union between completely different populations, the interpretation of one culture by another, guided Venetian chefs to become some of the first to embrace “fusion cuisine,” something that nowadays is quite trendy. (There’s nothing new under the ombra, as it were…)

In reviewing the history of Venetian cuisine, we notice the enthusiastic presence of spices. These particular, fragrant, and brightly-colored powders came from the distant lands of the East, bringing with them the charm and alure of exotic sensations, wrapped in an aura of mystery and myth.

Pepper, raisins, ginger, saffron, nutmeg, cinnamon, and cloves began to make their way into Venetian cuisine. They were used in many dishes of the time, both meat and fish, and in the exquisite sweet preparations: all delights that we might still find today at the family dinner table, and at the oldest and most authentic taverns.

My own experience with the food in Venice in consistent with Monica’s explanations. I spent about 7 weeks living in Venice in the spring of 2010, and it was the most serene (and tasty!) experience of my adult life.

On most days, lunch was in a normal bar, standing at the counter, or sometimes a tavola calda. Dinner was in the same quaint barcaro about 20 paces from the front door of my apartment where I nibbled and sipped and chatted with locals and tourists alike. Then maybe once or twice a week I ate dinner a proper osteria. My favorite was a place called Al Nonno Risorto Sotoportego, at De Siora Bettina, 2338. (I can’t confirm if it’s still open post-pandemic.)